Machinery For The Wire & Fastener Industry

VA-D for Rolling Threads on two sides of fasteners

The VA-D, Dual-Spindle thread rollers are designed to roll threads above and below the shoulder.

The threads can be either different or similar.

The two heads are independent, eliminating influence of one on the other, enabling use of simple and economical rolling dies.

·     Independent adjustments on both stations assure better quality of each thread.

·     Higher production speeds.  The second operation does not slow down the machine.

·     Inexpensive tooling and full control of the quality of each rolling operation. Tools are replaced in minutes.

The Dual-spindle thread rollers are equipped with two or more spindle for the purpose if straightening and thread rolling of long parts or for thread rolling two independent threads on the same part in one pass.

The machines can accept blanks fed by a tube directly into the threading station.  They can also be fed from a standard vibratory feeder for parts up to 380mm long or by a blade conveyor, for parts longer then 250mm.

Unlike the VA-K models, the second rolling station is a full size station, that can be used for thread rolling of a metric thread or for groove rolling or for extensive grooving that require more then the 1-2 revolutions available in the VA-20-K.

The special feed angle of these models allow a perfect feeding of long and non-headed parts from the first station to the second station.

Typical applications for these models are parts with two thread sizes that need to be rolled in 2 separate operations, or long parts with knurls, grooves or serrations that are rolled on a different diameter then the thread.

The VA-D models can be supplied with any combination of stations.  The first and second stations can be the same size or a different size, depending on the application.  See the VA or VA-ES pages for definition of the stations. 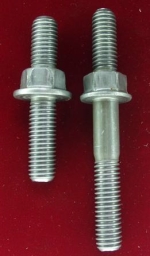